The carbon cycle and greenhouse effect are key components of the key stage three curriculum. We’ve developed some handy classroom resources to help your teaching and inspire your class to find out more.

The video below is a virtual tour of the University of East Anglia’s Greenhouse Gas Observatory at Weybourne on the north Norfolk coast. Since 2008 we’ve been continuously measuring atmospheric concentrations of carbon dioxide, oxygen, and carbon monoxide. It’s measurements like these that allow scientists to monitor changes in the greenhouse effect due to human emissions of greenhouse gases. The longest continuous record of atmospheric carbon dioxide concentration is taken from the Mauna Loa Observatory in Hawaii and dates back to 1958.

You can explore the latest data on atmospheric gases from the Weybourne Atmospheric Observatory here. The graph below shows concentrations of atmospheric oxygen (dark green, left y-axis) and carbon dioxide (light green, right y-axis) over a weeklong period. The yellow peaks show periods of sunlight. Explore some of the trends with your class. 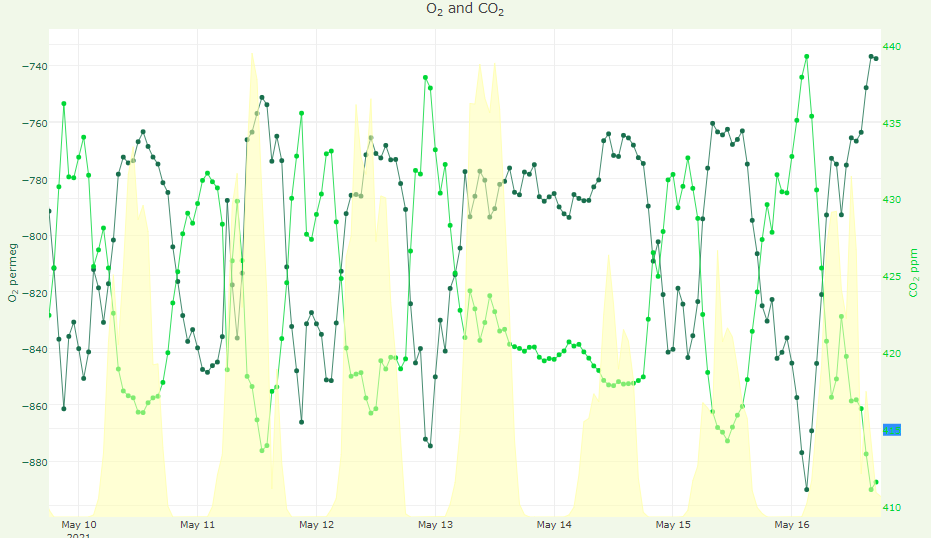 What do you notice about the relationship between carbon dioxide and oxygen?

What do you notice about the time of day that each gas increases/decreases in concentration?

At night, when there’s no light, photosynthesis stops, and respiration dominates. Respiration consumes oxygen and produces carbon dioxide. Hence we see the atmospheric concentration of carbon dioxide start to increase and oxygen decrease.